The world of Big Data: Apache Drill and why do I need it

Without what thing is impossible to imagine your life today? I suppose, the top answer will be Google. Data and the need for new info rule our life that is why Google is a real rescue. Using Dremel technology, it manages big data every second to provide us with an efficient search source, YouTube, Docs and other.

The same situation happens with BI world. Imagine a data analyst trying to sort and analyze huge unstructured data amounts himself. It will take 100% of his time. That is why big data tools are reliable support in it. And Apache Drill is one of them.

What is Apache Drill?

As you’ve already understood, our today’s star is Apache Drill. So let’s together explore this popular tool, starting with its characteristics.

Apache Drill is an SQL query engine designed for a large amount of data processing. It was designed to support high-performance analysis and restructuring of Big Data coming from modern applications.

Initially Apache Drill was inspired by Google Dremel, mentioned in the introduction. Drill acts as an intermediary that allows you to request self-describing data using standard SQL.

Drill includes a distributed execution environment for large-scale data processing. The Apache Drill is based on the Drillbit service, which is responsible for receiving requests from the client, processing them and returning results.

The Drillbit service can be installed and run on all required nodes in a Hadoop cluster to form a distributed cluster environment. When Drillbit runs on every data node in a cluster, Drill can maximize the data location during query execution, without moving data across the network or between nodes. Drill uses Apache ZooKeeper to maintain cluster membership and performance checks.

What are the special Drill features? There are 3 following peculiarities Apache Drill has:

Why is it useful?

What makes Drill so popular? Of course, there are some proof reasons and here are they:

How does Apache Drill work?

Let’s learn it in some details. The client or application sends an SQL request to the Drillbit in the Drill Cluster. Drillbit is a process running on each active Drill node that coordinates, schedules and executes queries, and also distributes query work in a cluster to maximize data locality.

Drillbit receives a request from a client or application and thus becomes Foreman for the request and manages it. The parser in Foreman analyzes SQL, applying special rules to convert certain SQL statements to a specific logical operator syntax that Drill understands. A set of logical operators forms a logical plan. It describes the work needed to generate the query results, and determines which data sources and operations should be used.

Foreman sends a logical plan to a cost optimizer to optimize the order of SQL statements. The optimizer applies various types of rules to rearrange the operators and functions in the optimal plan. It then converts the logical plan into a physical plan that describes how to execute the query. Foreman's parallelizer breaks the physical plan into a primary and secondary fragment. These fragments create a multi-level tree that rewrites the query and runs it in parallel with the configured data sources, sending the results back to the client or application.

Secondary fragments contain one or more relational operators that perform one of such operations as scanning, filtering, merging, or grouping. Each operator has a specific operator type and OperatorID. The ID defines the relationship of the secondary fragment and the operator.

Are there any similar solutions?

As the technology is so promising the logical question now: are there any other similar products? What else can the market propose? Is it possible to get even better results? Of course. Constantly growing and competing market inspires the software development companies to create new, fresh and innovating solutions. And GalaktikaSoft is not an exception.

GalaktikaSoft created a technological prototype of the future decision to work with real-time data Galaktika DataKit with the core of the Apache Drill engine.

The Galaktika DataKit solution is designed as a Self-Service Business Intelligence that has a user-friendly interface and is able to perform analytical tasks formulated in business terms familiar to the average user. 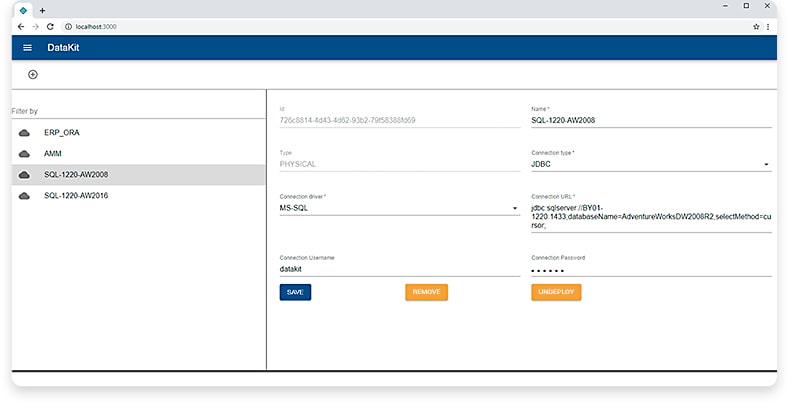 How does it work?

The system administrator determines the physical data sources that specific business users want to analyze. These can be databases of OLTP systems, Excel, JSON and other files, etc. The administrator configures connections to physical data sources and publishes settings on the Apache Drill server. Using the concepts of the relational model (tables, columns, associations) allows you to create a unified representation of data from different sources.

Then, the administrator using special visual designer models Perspective - a virtual data source scheme, expanding the physical source schemes with custom types, if necessary, adapting the metadata to the requirements of the business task.

In fact, at this stage, the scheme of the physical data source is translated into a language that business users can understand and the rules for linking and transforming data are configured. As a result, the views are formed, requests to data sources in ANSI SQL.

The views can be published to the Apache Drill server and reused, when creating new ones.

All those benefits will speed up the response of enterprises to external and internal changes based on interactive data analysis from all available sources.

The data is our everything. And every day it becomes more and more. That is why, it is almost impossible to imagine the life of a modern business manager or analyst without IT tools, which can aggregate and analyze data from different sources in real time.

Such tools as Apache Drill and Galaktika DataKit provide such opportunity. The key feature gives the ability to combine data from different sources in one request. Organize federated requests for data sources. At the same time, there is no need for a preliminary definition of data schemes: they are formed on the fly. Apache Drill allows you to process large data in a distributed Hadoop cluster environment.

In other words, try yourself and be aware, those tools will make your life easier.