From the conceptual angle, with the typical use of the component functionality, the 'Setting' is a stored value of a global variable within the limits of the system. The value of the Setting either can be stored as a global value (applicable to all users of the application system), or it can be specified for certain user or role. In order to implement such behavior, the concept of 'layer' is used. The layer allows to redefine the value of the setting in the following layer, for example, layer 'by users' allows to determine the values: 1) Global value 2) Value for the layer 3) Value for the user. This functionality can be used for the purposes of the application as well, for example, the Setting can depend on the document type, in which case the document type is the layer.

The concept of Settings has the following specifics:

The following discussion refers to training application Xafari Nortwind. It is necessary to add Settings to the application. The Settings must be accessible for the user so that the user can set values of the Settings. The list of the required Settings is shown in the table:

We also raise an additional requirement that the Settings must be combined in the following groups: 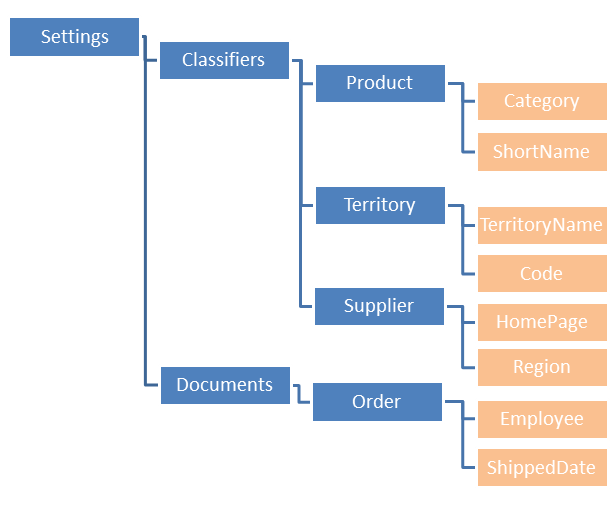 It is necessary to allow the user to set values of the settings at the following levels:

To achieve this, it is necessary to define three layers, respectively:

Each element of the second layer will be based on an instance of 'Department', and elements based on the instances of 'InheritedUser', that belong to the specified 'Department', will be its descendants.

To start the work with application settings, it is necessary to connect the following modules:
XafariBCSettingsModule has to be connected to a platform-independent part of the application solution.
A link to the respective library will be added to directory 'References' of the project.
Recommendation: Link the library again manually.

Description of the last layer:

This code tells that instances of class 'NorthwindSettingsInheritedUser' will represent the last layer in the layer hierarchy, and also:

Description of an interim layer:

This code tells that instances of class NorthwindSettingsDepartment will represent an interim layer in the layer hierarchy, and also:

This code tells that instances of class NorthwindSettingsDefaultValueSlice will represent the default layer in the layer hierarchy, and also:

Description of settings and setting groups

Let us describe the interface containing settings for application Northwind:

We extend model node Setting in the platform-independent module (file Module.cs) by adding a setting node for application Northwind:

The following code was used to describe settings group Documents:

Please note that when describing a persistent type setting, it is necessary that the setting interface is inherited from interface IModelBCSettingsObjectItem, and the domain logic of the setting is inherited from class IModelBCSettingsXPObjectItemLogic. The remaining parts of the process of creation of the persistent type interface do not differ from the process of creation of the non-persistent type setting.
Let's return to the description of settings for application Northwind.
Setting group Classifiers is described as shown below:

In the description we can see, that group Classifiers includes groups Product, Territory, and Supplier. These groups and the settings contained in them are described, as shown below:
Group Product:

Setting Category, which is a member of group Product, is described, as shown below:

After the above manipulations are completed, it is necessary to assign an instance of the class described above to property Instance of class SettingsAccessor (this assignment is made based on event LoggedOn of the application):