The Idea of Xafari Application Starter

Xafari Framework is often used for development of large business applications handling such tasks as manufacturing or asset management. These applications usually have dozens or even hundreds of users and need to be updated regularly in order to correspond to the ever-changing market and industry requirements. This leads to various issues related to maintaining different versions of the system for different users or groups of users.

The most common issues include:

In order to simplify the administration of Xafari applications, we have developed Xafari Application Starter utility, or AppStarter.

AppStarter is a separate Windows application that is installed on the end user’s machine and helps to create and manage local copies of the required versions of the Xafari application. 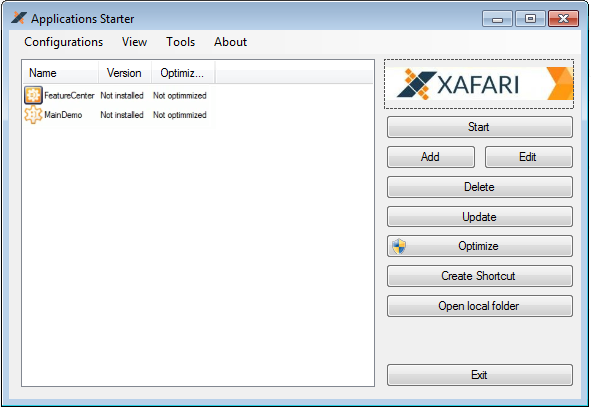 Another important feature of AppStarter is optimizing the local application copy’ code with the help of utility.

Last, but not least, when used in combination with Xafari.Accelerator, AppStarter improves application performance by reducing application start time by at up to 3 times on the client computer.