As you know, the data in OLAP cubes has a multilevel hierarchical structure. This form of data representation is easy and comprehensible for humans. However, when the client application receives it from the OLAP data source, it is transformed into a flat table. Working with the data in such form is not very convenient for the end user, and Ranet OLAP groups the members in the dimensions in order to provide a more usable form to work with and analyze the data.

Ranet OLAP UI for WPF provides three group modes for the data in the pivot table: None, Group Neighbors, and Group To Hierarchy. Let’s review them in more detail on a real example.

We have applied member choice filter to different levels in the [Product Categories] hierarchy (Selected elements).  Labeled as parent are the elements that have not been selected but are automatically included in the tab as parents of the selected elements (they are used for building the hierarchy). 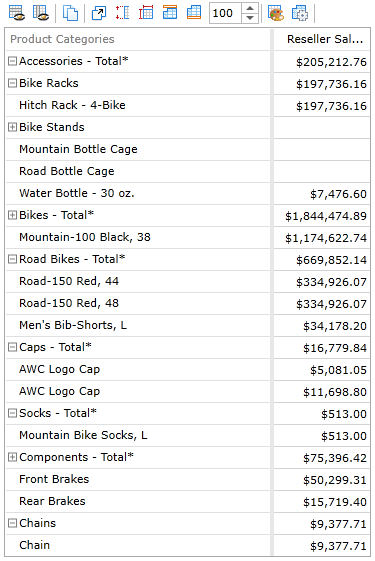 Group Neighbors mode groups elements in the rows and columns with the neighbor elements that have identical keys (KEY0). If the element in the row above is a parent to the element in question, they are organized in a tree-like hierarchical structure in the pivot table. You can see examples in the figure below:

Group To Hierarchy mode displays the elements according to the structure of the hierarchy in the OLAP cube used as the data source.
As you can see in the figure below, Road Bikes and Chains subcategories have been moved up in the pivot table and added to the Bikes and Components hierarchy trees, accordingly, as they are direct child members of these elements. At the same time, the elements that have no direct parents in the table, haven’t been added to any hierarchy. In order for an element to be added to the hierarchy, it needs to have a direct parent in the table (not an ancestor element).

Using different group modes can help users highlight different aspects of the data, depending on their requirements.

We hope this post was helpful to you. You can test this and other features of the pivot table control of Ranet OLAP for WPF in the free 30-day trial.